on your second round 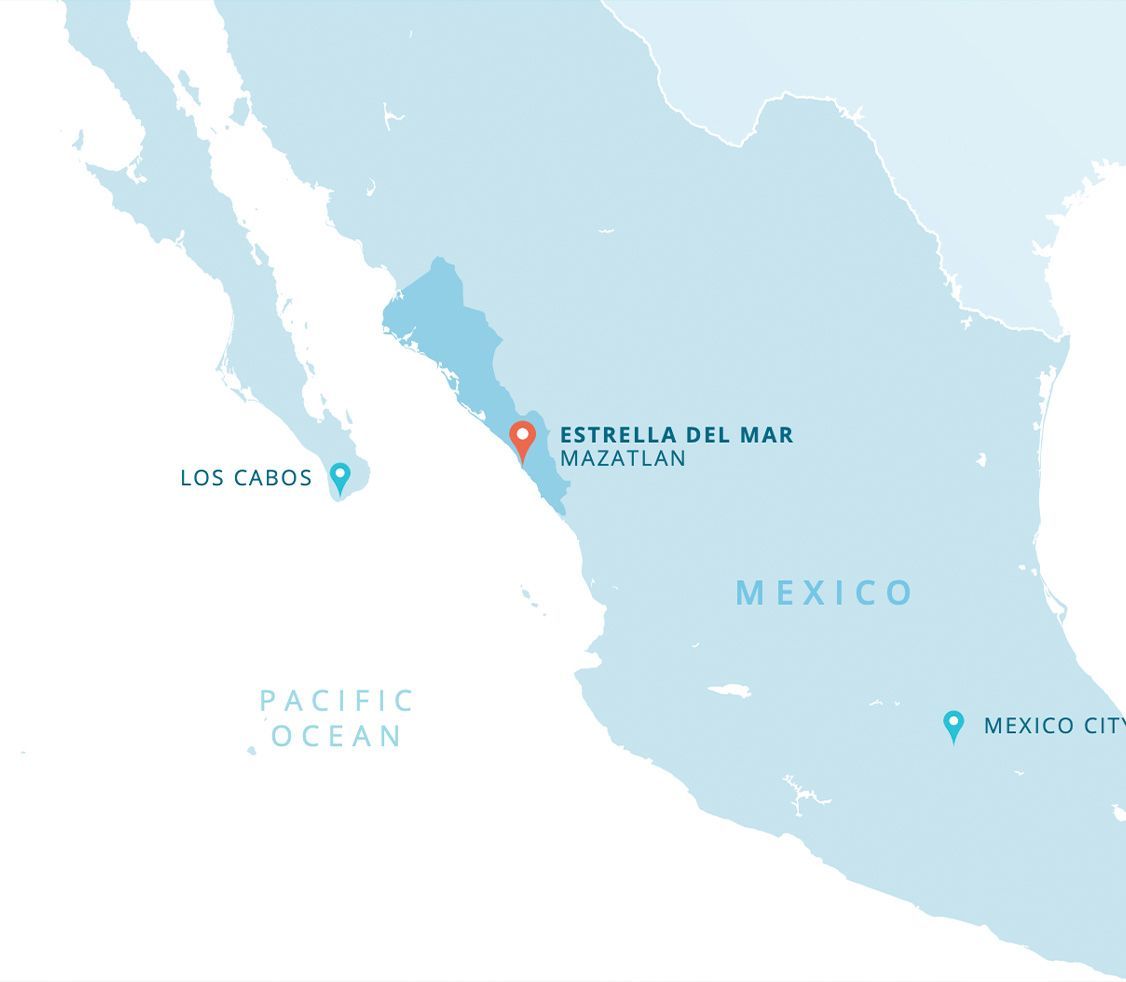 The Architect of Golf Course

The 72 par 72 course at 7,015 yards from the pros' marks, features newly renovated Bermuda fairways and greens with PURE DESTINY PASPALUM. It is a challenge for players of any level. The design is spread over 178 acres with large bunkers and 11 lakes that run the length of the golf course lined with palm trees and native vegetation and 6 holes right next to the sea.

The golf course and complex have hosted some of the best professional golf tournaments in the region, including the 2011 PGA Canadian Championship, the 2014, 2015 and 2016 PGA Tour Latinamerica Mazatlán Open, Estrella del Mar 2020 and the Open Mexico 2021. The course has been ranked among the best resorts in Mexico travel and golf magazines.

This dogleg left opening par 5 gives the player the opportunity to start with a good score. Generous off the tee with bunkers guarding the right side of the fairway, the initial tee shot should be placed on the left side of the fairway to allow the player to play a shorter hole and the longer hitters an opportunity to reach the green that is protected by bunkers on both sides. The green slopes severely from back to front, making it important to place your approach on the proper side of the green in order to be confident with your putting stroke.

The opening tee shot on this short par 4 that usually plays against the wind is to be placed towards the left side of the fairway. A large lake guards the right side of the fairway all the way up to the green. The second shot presents a challenge and one should always favor the center of the green to avoid the bunkers on both sides. Again this green slopes from back to front so be careful with the speed putting downhill.

This dogleg left par 4 plays usually against the wind, a player should favor the right side of the fairway to avoid a set of Palm Trees on the left side with a large bunker. The right side plays fair with a small pot bunker at the 220 yard range that is critical to avoid if the player wants to reach this hole in two shots. The approach plays uphill and usually into the wind as the Pacific Ocean breeze swirls behind the large green surrounded by bunkers on both sides. Middle of the green to any pin is a safe bet on this challenging par 4.

This dogleg right Par 4 plays longer than the actual yardage. A full set of Palm Tree´s guard the right side of the fairway with a bunker on the left. Place your tee shot on the left side of the fairway to avoid being blocked by the palm trees; longer hitters can try to cut the corner and have a short approach shot for their second. This green is guarded by bunkers and the middle of the green is a great spot to play you next shot. No. 1 handicap hole for the men & ladies.

This short Par 3, the shortest hole on the course plays sneaky tough. There is a false front guarding the front part of the green with bunker´s on both sides. A shot long has room to spare and is the safe play. This hole with its small green can make or break the momentum of the round.

This reachable Par 5 for long hitters is guarded off the tee with pot bunkers on both sides of the fairway. In order to get close to reaching this green in two, the player must avoid these bunkers. The lay-up shot is quite simple and one just needs to avoid the right side bunker of the fairway 100 yards from the green. The slope on this green tilts front to back so it makes it difficult to stop the approach shot unless the player can put substantial spin on the ball or play the bounce of the front of the green. The green is guarded by two bunker next to each other on the front of the green.

Coming down the stretch on the front nine, this challenging Par 3 holds the largest green on the golf course. This double tiered shaped green give´s the course the opportunity to select different pin positions in order to make the hole play tough or easy. Being on the proper shelf is crucial as we have seen many 3 putts or worse from players out of position. The shot plays to the actual yardage depending on where the pin is set up.

The finishing hole in the front nine is a dogleg right Par 4 with a large bunker running all along the right side of the fairway, the safe play is to favor the left side of the fairway as the second shot is played uphill to a small green which is tough to hold, making it crucial to hit the fairway to achieve the proper distance control on the second shot. This small shaped green is guarded by bunker on the left side and a false front on the right side.

Opening the back nine we face the shortest Par 4 on the golf course and the easiest on the course rating. The tee shot should be placed on the middle of the fairway to avoid a pair of bunkers, one on the right and one on the left side at different distances. The second shot plays straight forward to mid-size green with little slope. A good hole to start with the right mind set for the back nine.

The first Par 3 on the back nine borders the Presidio River and the course layout takes players towards the ocean holes. At only 162 yards, this hole usually plays longer as the sea breeze hits the player’s front on. The green is protected by bunkers on both sides and the O.B. left demands the player to hit center of the green to any pin position. This shot usually plays 1 or 2 clubs longer. Par is a great score on this hole.

This is the first hole on the back nine that hits the ocean. This challenging Par 5 demands accuracy off the tee, a large bunker protects the right side of the fairway and O.B. all along the left side. Once a player is successful in hitting the fairway, the second shot will play straight against the wind to a generous landing area. The longer hitters might give a shot to reach this green in two, but the player will face a tight landing area protected by a bunker on the front and O.B. on the left. The green is fairly small so accuracy will be a factor on the approach shot.

The signature hole on the golf course provides many challenges especially off the tee. With O.B. on the right side and a water hazard on the left, the player needs to commit to the proper line; favoring the right side of the fairway is a smart play on this par 4 that plays usually against the wind. The second shot plays against the wind to a double sloped green protected by water hazard on the front and bunker behind. Par is a good score on this hole, tournaments have been won or lost on this signature hole.

This beautiful picturesque par 3 runs along the Pacific Ocean and usually plays up to 3 clubs longer depending on wind conditions. Plays directly into the ocean breeze and the player must guard missing the shot left as the O.B. run all along the left side. The small shaped green demands accuracy, play the tee shoot favoring the center/center right side as relative easy putt or chip awaits the player from that side of the hole.

This long par 4 slight dogleg left is the second most difficult hole on the course. Usually it plays against the wind and the players must avoid the bunkers on both sides of the fairway. The second shot plays into the wind to a well-protected green with bunkers on both sides, the green slopes from right to left and the second shot usually plays a couple of clubs longer. The players should try to putt uphill on this difficult green.

Coming down the stretch, this finishing hole plays slightly uphill and into the wind. Bunkers protect both sides of the fairway and beyond the bunkers there is O.B. on both sides. The second shot the players needs to pay close attention to the wind, as it could play up to 2 clubs longer depending on how strong the wind is at the moment of execution. The small shaped green is protected with a bunker on the front and O.B. back, so distance control is a most on this challenging finishing hole that runs towards the ocean.

We have Taylor Made & King Cobra sets available for rent.

We have a fleet of 70 club car golf carts.

Contact us at 669 915 8300 / Ext. 1000 or email This email address is being protected from spambots. You need JavaScript enabled to view it. for more information and availability. 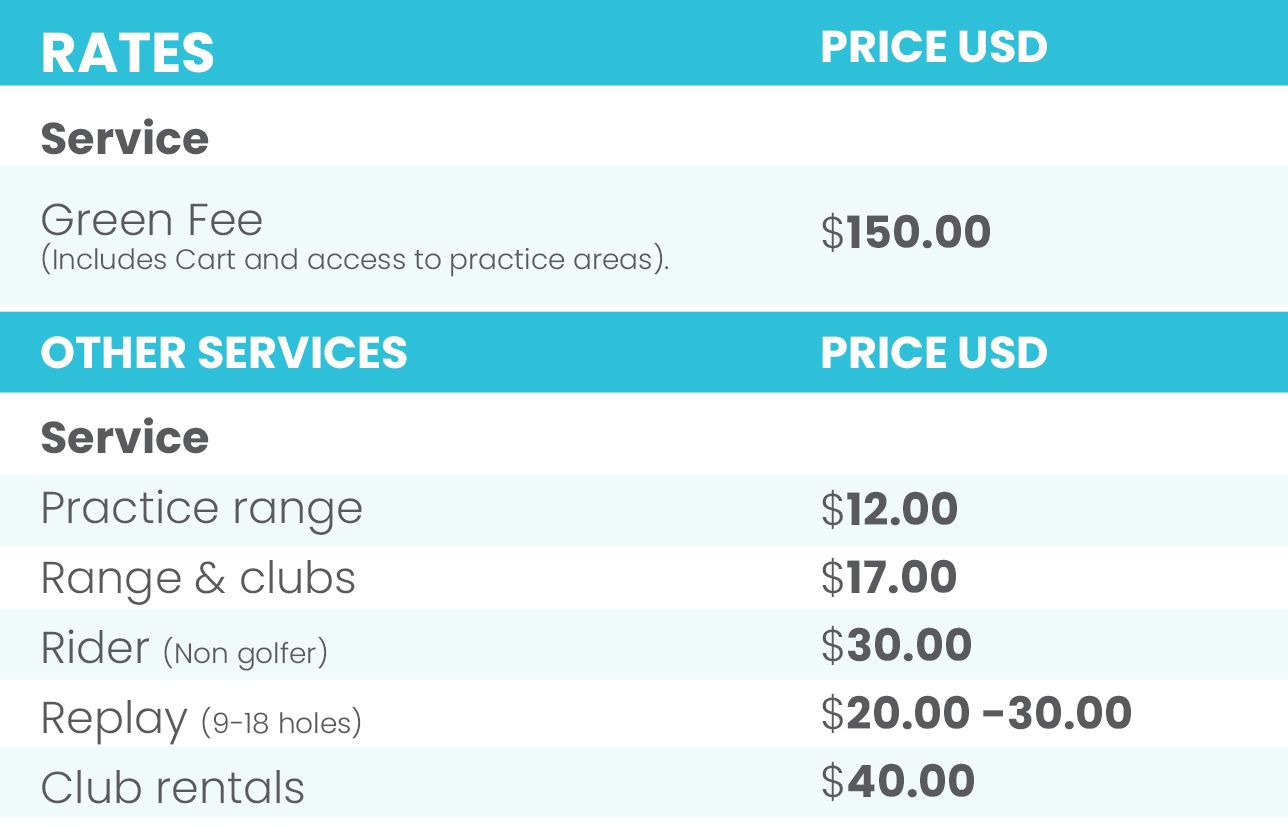 USA & Can Toll Free: 88 8587 0609
Reservations: This email address is being protected from spambots. You need JavaScript enabled to view it.